The Wayfarers of Aetolia

The Wayfarers are hardy warriors, originating from the wastelands and wilderness of Albedos. The original Albedi group maintains a constant watch over the forces of Drakkenmont, resisting the Empire as it strikes forth from its southern bastion to regain power over the continent.

The other primary group of Wayfarers roams the continent of Sapience, their training independent of the regulation of its four major city-states, even if they hold citizenship themselves.

Loners by nature, the Wayfarers tend to avoid large settlements, scavenging what they need from the land. They venture into outlying towns solely for information and bounties. Scattered across the continents, they unite only to share stories, trade information, and warm themselves by the vigil fires in their camps and hideouts - then, they venture forth once more. They have never had a need for a central authority, eschewing the guild structure common upon the continent of Sapience.

A Wayfarer will always be found carrying several handaxes - their weapon of choice - and they don leather armor in preference to heavier protection in order to preserve their mobility. When opportunity presents itself, they will cut a raging swathe through their opponents, stopping only to claim trophies from the fallen. They dive fearlessly into the fray, their commanding shouts inspiring allies and striking terror into their foes.

Above and beyond other fighting folk, they are a fury to be reckoned with upon the battlefield, employing the arts of Wayfaring, Fury, and Tenacity to endure, outlast, and destroy their enemies.

Adventurers looking to apprentice as a Wayfarer should seek out Hemold, typically found in Helba in Albedos. For a fee of 40 credits, he will share his knowledge (LEARN WAYFARER FROM HEMOLD at v50477).

Adventurers may practice these skills within their guilds, however newbie Wayfarers that join through the introduction can not join a guild until they have met the multiclassing prerequesites of being Virtuoso in Wayfaring, Fury, and Tenacity, or Transcendent in two of them. 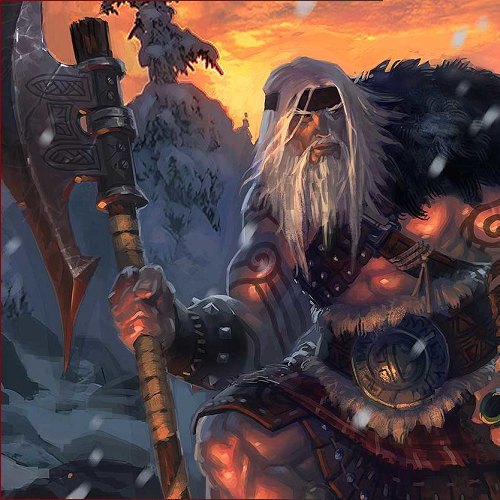 The skill of Tenacity is a versatile and powerful martial art, practiced by the Wayfarers and focused solely upon the use of handaxes. The Wayfarer's strikes are both accurate and devastating, and are lent broad usefulness by the handaxe's utility in both close and ranged combat. The handaxe, in this fashion, is an expression of the mindset of the Wayfarer: infinitely adaptable, and relentlessly brutal to one's enemies.

Wayfaring is the survivalist's way, representing subsistence and mastery over one's environment. Encompassing a broad spectrum of defensive and protective skills, practitioners of Wayfaring learn to use their environment and master their own athleticism to fight in the face of any threat, whether beast or nature. The master Wayfarer can adapt in a short time to even the most unfamiliar environment, for there is none they cannot make their home.

Fury is the ability of the Wayfarer to harness the rage of blood and battle as a potent weapon. As they deliver blows and take them in turn, their fury builds, to be unleashed in a number of ways. By inspiring their allies and overawing their enemies, the Wayfarer's voice alone can shift the course of battle and turn the tide of any skirmish.

Ready to play a Wayfarer?

Wayfarers are warrior rangers, first originating from the wastelands and wilderness of the continent of Albedos. These first Wayfarers stand in opposition to the forces of Drakkenmont, resisting the northward incursions of the Dreikathi Empire. As the tradition has spread beyond its origins, a second group of Wayfarers emerged upon Sapience. Their arts are fully independent of the conflict between Spirit and Shadow, though Wayfarers can and often do serve one side or the other.

The sources of the Wayfarer's arts include:

Wayfarers are hardy, physically imposing warriors, and they rely upon speed and cunning, as well as brute rage, to subdue their foes. The use of handaxes is their most notable characteristic, consisting of various targeted strikes, powerful throws, and dexterous counterattacks. This balance between strength, speed, and cunning is at the heart of the Wayfarer's survivalistic style.

The arts of a Wayfarer are purely physical, eschewing the magical and telepathic augmentation common in various Sapient arts. Although these skills demand the Wayfarer's physical fitness, they regularly push themselves beyond their limits in order to compensate for the enhanced capabilities of their foes. Over time, the Wayfarer way of life leads to joint problems, aches, and permanent injuries in old age - that is, in the unlikely event that they live that long.

Loners by nature, most Wayfarers tend to avoid large settlements, scavenging what they need from the land. They venture into outlying towns solely for information and bounties. Scattered across the continents, they unite only to share stories, trade information, and warm themselves by the vigil fires in their camps and hideouts - then, they venture forth once more. They have never had a need for a central authority, eschewing the guild structure common upon the continent of Sapience, and otherwise tend to pursue their own ends.