The Luminaries of Aetolia

Founded in Slyphian, year 97 of the Midnight Age as the ancient order of Priests consumed itself amidst Corruption and frivolity, the Luminaries were a guild that combined the old teachings of Spirituality and Devotion with a rediscovered art of the old Illuminai - that of Illumination.

The Luminaries soon led at the forefront of the war against the Darkness, wielding mace, shield, angel, and sacred magics against the many enemies of the Light. Not solely defined by the worship of the Light itself, their focus included the many Gods of Spirit. Like the priests of old, though filled with fire anew, they served as warriors, ministers, and healers of the southeast.

Upon Khepary 13th, year 452 of the Midnight Age, the Luminaries were dissolved under order of the prophet Kayalenki, in order that their members and members of the Daru would form a new Illuminai order in the southeast. The Luminary legacy is that of deep, profound faith, and a constant attention to the Light and Fire which light the city of Enorian, and the lands of the southeast. Though the guild is ended, the teachings live on within the Illuminai. 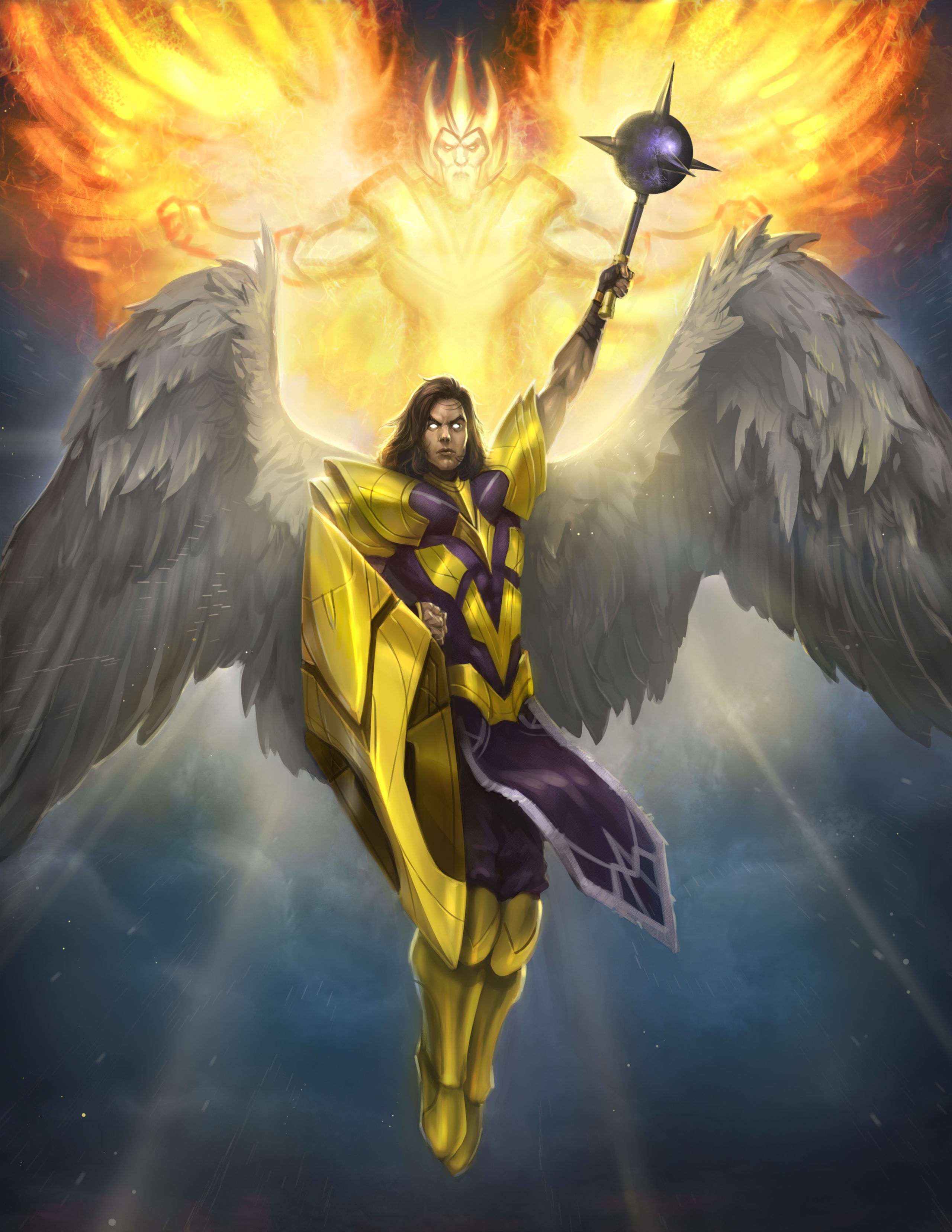 Spirituality is an art centered around three primary components: the spiritual mace, the shield, and the guardian angel. The trained Luminary employs all three in order to enact the Light's will and fight for the Age of Dawn.

The mace is an ordinary mace, empowered by Spirit - it deals magical rather than mundane damage, and can be used to direct the Luminary's righteous powers in other, more sophisticated ways.

The shield is a complement to the mace, allowing the Luminary to cast several spells of Light. More mundanely, it can be used to deliver crushing, stunning blows.

The guardian angel is a creature of Spirit, and the Luminary's steadfast companion. It acts in a primarily defensive, supporting capacity, but is capable of terrible feats of violence. Additionally, angels maintain a strict antipathy toward beings of Chaos, and can sense their unnatural presences even at great distances.

Devotion is the core expression of a Luminary's devout faith, an art by which life essence is shaped through both worship and magical principle. Using this powerful force, the Luminary is capable of performing all manner of miraculous works: blessings, rites, and even terrible curses against the Darkness lie beneath its purview. The greatest of its feats - famously attested in the tale of Syvelium - is the resurrection of the dead.

Originally developed by the Illuminai, a powerful religious order and guild of the Second Mortal Epoch, Illumination is the art of manipulating light and fire, and was rediscovered by Sahmie Rhashye following her Revelation. The skill is used by the Daru and the Luminaries, and it is closely intermarried with the philosophy of the Light and the prophecy of the Age of Dawn. The ideological goal of any practitioner of Illumination is to bring about Light in the world around them, and to bring themselves and others closer to it.

Practitioners of Illumination rely upon their own Inner Spark to fuel their evocations, and also upon a sacred flame. In days past, the Daru and the Luminaries each maintained their own flames, which they termed Sparks - in the present day, however, a Grand Flame burns atop the Temple in Enorian, and both guilds make a practice of meditating upon it to restore their own Inner Spark. Evocations take a number of forms - offensive, defensive, and restorative arts number among Illumination's applications.

Ready to play a Luminary?

Luminaries are priests of Light and Spirit, who emerged following the dissolution of the Priests and their subsequent reformation under Sahmie Rhashye in the year 97 MA. Serving for centuries in a guild of the self-same name, they eventually unified with the Daru Zealots following the War of Night, in the year 452 MA, to form the Illuminai reborn. They are practitioners of divine magic, including communion with the Spirit Plane, devotional prayers, and Illumination, their characteristic art of fire.

Who were the first Illuminai?

The Illuminai first emerged in the epoch prior to the Midnight Age, a southeastern movement founded in Shallam - the city that is now Enorian. Their monolatrous faith was one of fire, centered upon the Goddess Mebrene, though they also drew inspiration from Idar Karif and his warriors of Light. As the first practitioners of Illumination, they succeeded in overthrowing the Sultan's corrupt rule and instituting spiritual and political reforms under the governance of Kayalenki, their leader and high priestess. Eventually, however, a combination of internal dispute and outside threats crushed the Illuminai and their temple, and the sultanate was restored.

What is the Spirit Plane?

Rewh'va, the Plane of Spirit, is the source of the element of spirit, which is an essential component of all the Luminary arts. The element of spirit crosses into the Prime through the sun, which is itself an immense portal connecting the two planes, and is found in all living beings - from the smallest grasses to the mightiest beasts. Without the Spirit Plane, neither life nor the Luminary's disciplines would be possible. The Duamvi, a symbiotic race created by the Triad of Angels, originate from the Spirit Plane.

The sources of the Luminary's arts include:

Luminaries also undergo training with mace and shield, learning to combine these martial disciplines with their spiritual power.

Luminaries are well-armored, formidable presences in battle, forgoing extraneous movement in favor of powerful, direct strikes with magic and shield - withholding the mace for targeted strikes and expressions of light and fire. Although their devotional rites often possess accompanying movements, even these tend to be restrained in the interest of their piety. Light and sparks often linger about them during, as well as after, using the fiery evocations characteristic of Illumination.

Spirit, being the most lively and energetic of the elements, may, over time, shift the personality of any practitioner who draws upon it frequently - and Luminaries are no exception. Even calm personalities may be rendered more excitable, extreme, or volatile by its influence, a quality which often exists in tension with their priestly arts.

Owing to the discipline, faith, and repetition upon which the Luminary's rites are based, there is a strong tendency to ritualize everyday behavior. Whether this manifests more usually, as in speaking a blessing before meals, or extends to particular ways of washing hands, walking home, or preparing for bed, Luminaries often rely upon these routines in order to remain grounded.

Luminaries firmly embody the priest or cleric archetype found in other games, being defined by faith, ritual, and devotion in equal measure. Spirituality and Devotion are skills which reflect this archetype, both implying the worship of the Gods of Spirit. Illumination is the skill that ties the Luminary to Enorian, and it is closely associated with Mebrene, the essence of fire. Regardless of whether they directly worship a God or not, Luminaries are universally devoted to the cause of Light, seeking to bring about the end of the Midnight Age and usher in the prophesized Age of Dawn.

Every Luminary is capable of summoning a guardian angel, due to an age-old contract sworn between Idar and the Triad of Angels that has held to the present day. Angels are embodiments of perfection, held in high reverence upon Rewh'va, and dwell in the space between Spirit and Prime. When summoned, they do not physically appear, but instead project their presences across the cosmos. They are able to protect and heal their Luminary companion as well as strike against their foes. Over time, as the bond between Luminary and angel strengthens, the projection may acquire a more distinct form and unique characteristics, setting it apart from others.