Established in the year 164 MA, the Teradrim warband are a group who pursued power through the domination of the Earth. Making their home in Bloodloch, they reside within the deep caverns of the city, and from this Earthen Grotto they - along with the Earthcallers - keep watch over the Pillars of the Earth in an eternal vigil.

Charged with maintaining the strength of the Pillars, they guard the prisons of the ancient Sorcerer-Kings, a bulwark against the cataclysm that would occur should they ever break free.

Through the skill of Terramancy, the Teradrim eschew the finer elemental arts and wield the earth as a veritable bludgeon. Their very will is made manifest in binding rites that call upon earth and stone to shatter the limbs and skulls of their foes. Through Desiccation, the Teradrim draw upon the sweltering sands of the desert and leave the whole of the landscape as a desolate wasteland beneath their peerless touch.

Finally, with Animation, the Teradrim raise soulless soldiers of stone and earth to follow their bidding as golems. Imbuing their forms with etched marks of power, the golems are bound to the very will of their masters and are tireless in their duty to serve.

The strongest amongst the Teradrim stand as kin of the Earthen, imitating their forms and drawing upon the power of the Pillars of the Earth to fuel their boundless strength. 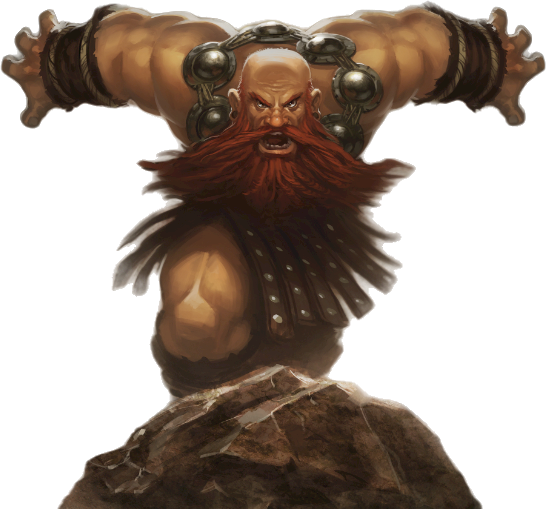 The Earth requires great strength to control and master, and only a Terramancer posseses the necessary requisites to do so. The flail is the weapon of choice for a Terramancer, for it is one of the few weapons brutal enough to hew apart stone with a swing.

Animation is the skill of creating powerful golems from natural resources. Once crafted, a golem will remain extremely loyal to its master, protecting him and damaging his enemies.

Upon your golem reaching level 100, you are able to customize it as per HELP CUSTOMIZATION.

When customizing your golems, keep in mind that they are creatures made from the Earth. As such, only earthen materials can be used - stone, clay, gems, etc.

The Teradrim exert their will on the land, draining it of moisture, energy, and life. This is the art of Desiccation, the magic of the Earthen.

Desiccation revolves around creating regions of sand which empower the Teradrim's abilities. At higher levels of skill, this can be manipulated into a great sandstorm which substantially empowers the Teradrim's offense.

Ready to play a Teradrim?

Teradrim are warrior mages who draw upon the element of earth, waking stone and lifeless sand to do their bidding. Combining martial prowess with an enduring elementalist tradition, they transform the environment around them, animate powerful golems from materials of the earth, and beat their enemies into broken submission with the use of a flail.

Charged with maintaining a solemn vigil over the Pillars of the Earth and the Sorcerer-Kings held captive there, the role of the Teradrim is that of jailer and warden, guardian against the oblivion that would come should their prisoners break free and bring about the breaking of the world.

Azvosh is the Elemental Plane of Earth, the source of the elemental earth that forms part of the fabric of reality and the composition of the Prime Material Plane. Potent and unyielding, the nature of earth is that of strength and absolute purity, of glory in battle, violent conquest, and endurance without end. Ivoln, the Earthen Lord, instilled these values into the Earthen when He Himself conquered the plane in ages past, a triumph memoralised and still imitated by the Earthen in the modern era through disciplined war dances.

What are the Pillars?

The Pillars of the Earth are ancient, cthonic structures formed in a long-forgotten age. They reside in the yawning void between Azvosh and the Prime Material Plane. Uncountable in number and fathomless in size and scope, they are the shoulders of the world, mighty monoliths that keep the two planes from colliding with one another and bringing about a devastating apocalypse.

In ages past, the Sorcerer-Kings of Azvosh, some of the highest ranking Earthen, sought to steal the power of the Pillars for themselves. In doing so they invoked the wrath of the earth and found themselves bound to the Pillars for an eternity, constantly sapped of their strength as they strive to break free. For all that, the Pillars are a deadly prison, a living embodiment of the earth's cold hunger that must be consistently fed with offerings of blood in order to maintain their integrity and strength.

How the powers of the class are accessed

All three skills draw on the earth for strength in various ways.

Teradrim forsake graceful motion in favor of brute strength, a quality reflected in all three of their skills. All of these are direct, forceful expressions of the earth, and even their golems are bulky, powerful entities, able to use their size and might to aid their maker. The effects of their elementalism are impossible to mistake, bereft of subtlety and delicacy.

A connection to the Plane of Earth carries an innate risk to all the Earthen, namely the threat of succumbing to that same madness plaguing the Sorcerer-Kings. The earth is hungry, demanding of both respect and consistent obeisance to maintain favour; offerings of blood must be made regularly in order to prevent this madness from taking root. Disrespecting the earth is a fool's endeavour, and those who break faith will find themselves bereft of strength.

Teradrim, as warrior mages, are physically fit - a consequence of their elementalism, and the strength and endurance required to wield it on a consistent basis. Owing to the direct nature of their arts, on the other hand, they are often stubborn and singleminded, a trait exacerbated by their state of Undeath and detachment from the Cycle.

Because of the Teradrim's predilection for war and destruction, trusting others can become more difficult. Paranoia may form if the mind lacks sufficient strength to resist the isolation common to their practice, seeing threats and enemies everywhere and eventually losing the ability to discern friend from foe if they are not fellow Earthen.

A strong sense of duty is essential for the Teradrim, charged as they are with so important a responsibility. Members of this class should revel in opportunities for conflict and war, eschewing attempts at peace and reconciliation in favour of conquest and expressions of raw, untrammeled might.

Yet balancing that blood lust is a deep and pious reverence for the earth and for Ivoln - known to the Earthen people as the Great Father. Undeath is viewed as the ultimate expression of Azvosh's purity: a gift from the Lord that allows the Earthen to endure for eternity, bolstering their strength and resolve in order to most effectively carry out their work.

The earth does not abide the weak or timorous, and the Teradrim recognize this, seeking to as easily manipulate rock and sand as to stride across them. They consider plants to be a blight upon the most sacred of elements, and therefore seek opportunities to permanently rid the earth of nature's stain.

Golems are semi-autonomous expressions of a Teradrim's will, built from various substances of the earth and animated by Earthen runes of power. Though they are possessed of rudimentary intellect and are able to follow basic commands, they are not fully sentient and require their maker's guidance to act. At more advanced levels of Animation, golems may be taught reflexes, devastating combat maneuvers, and even become a sort of second body to their maker.