The Consanguine, as many call themselves, are sentient with some faint similarities to their mortal selves, but as different from mortals as night from day. Neither mortal nor truly immortal, vampires exist in a supernatural state somewhere between life and death. A race unto themselves, Consanguine vampires may choose to join a Guild that permits undeath, the focal point of the Consanguine being the Dominion.

The Embrace is the process by which a new vampire is sired, or created. Whether viewed as a precious gift or a terrible curse, it is never given lightly; after all, one more predator means more competition for resources. During the Embrace, the body reworks itself, sloughing off the imperfections present in every mortal form and becoming more beautiful, with the grace of a predatory animal. The new suckling reawakens, but his heart does not beat nor do his lungs exchange air. He is now one of the living dead. He wakes suffering a ravenous hunger for blood, his first acquaintance with the monster that has been spawned within him.

All vampires come with three shared sets of knowledge - Corpus, Mentis, and Sanguis. The enhanced physical prowess is embodied in the skill Corpus, with which their bodies are imbued with supernatural efficacy through the use of Blood. The Mentis skill gives a vampire the power to influence the minds of mortals with his awesome and terrible undead presence. Sanguis grants them mastery over their own blood and the means to wield it as a tool. This also allows them to Sire and Embrace others into their bloodline. 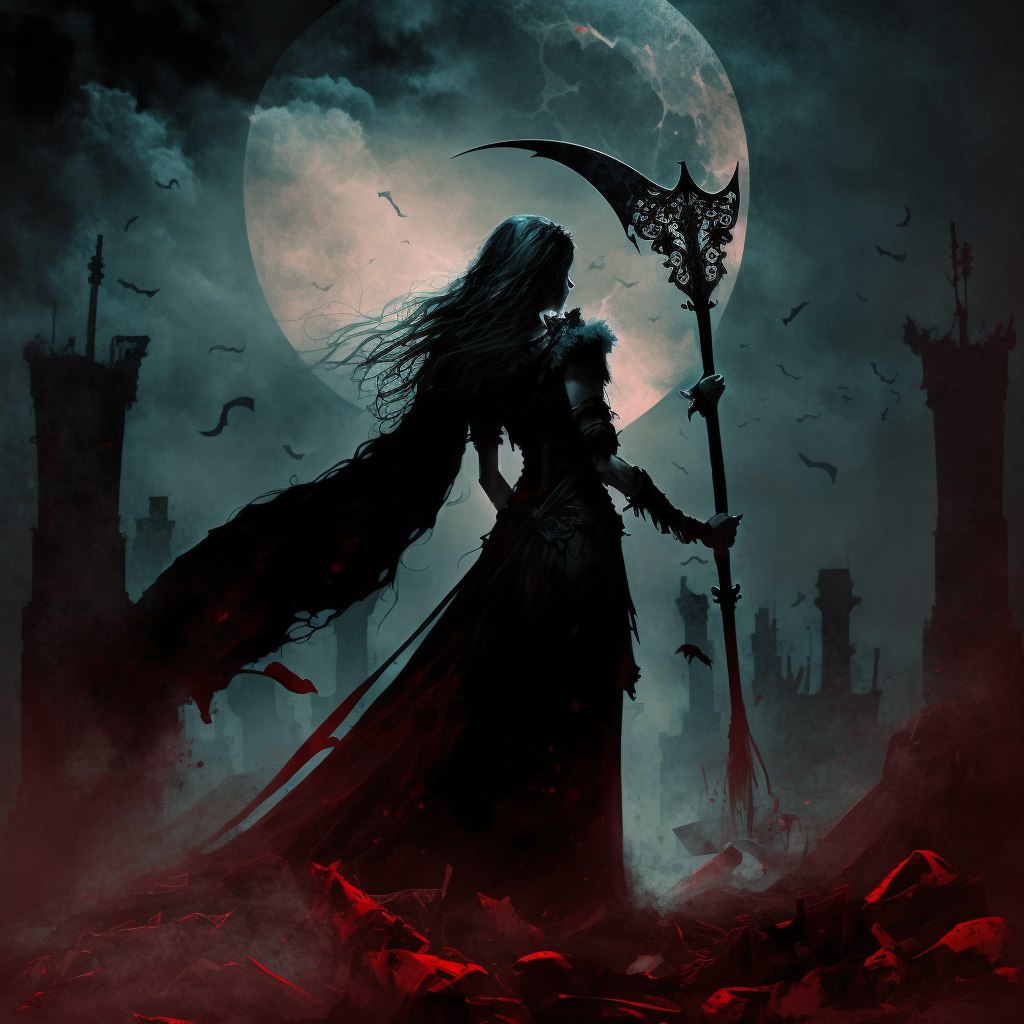 The vampiric art of Corpus reflects one's mastery over the Body. Within this discipline, a vampire learns to hone their predatory senses to incredible sharpness, improve their speed and reflexes to supernatural proportions, make their body resilient against all manner of damage as well as learn uncanny abilities in deception and stealth, among other things. For a vampire, Corpus embodies the art of physical combat. A vampire that has fully developed this skill is a terror to behold and you would do well to run in fear when faced with one who has mastered this art.

The brilliant intellect of vampires harbor a fire and shrewdness unmatched among mortals. Through the mysterious powers of Mentis, the vampires spread mental afflictions, fomenting insanity among mortal and vampire alike. These telepathic powers start merely by expanding the consciousness, but as a vampire's powers of Mentis grow, their strength of will channels into the power to bend minds and control actions.

With a piercing gaze, the master of Mentis can cause even the strongest mortal mind to crumble and push even other vampires to accede to their desires. This powerful mental discipline encompasses subtle textures and emotional states, transcending the physical limitations of the body while developing sharpness of the Mind.

The unwholesome practices of the vampire comprise several paths of magic. This one, by far, is the most gruesome as it centers on the mastery of the mystical powers of Blood to transform and reanimate formerly living flesh. Masters of the skill are said to be able to propagate their own foul undead blood in the bodies of others.

Ready to play a Praenomen?

Born in the covetous clasp of night, Praenomen are ruthless vampires who crave two things: Blood and Domination. Donning the armaments of savage nobility, these individuals bring to bear their immense physical strength, their unparalleled will, and their mastery over the blood to take what they desire without mercy or compassion.

Centuries ago a new race arose from the ambition of an Ankyrean conclavist by the name of Yrtez. With the aid of Chakrasul and Severn, Yrtez enacted a ritual of incredible ambition: to harness the Immortality of the Gods Themselves. A long time goal of the Conclave of Magic, through trial and error, and with many failures and setbacks, Yrtez eventually attained some measure of success. In blood and shadow she was reborn, rechristening herself as Queen Belladona. In the modern era, we have come to understand that an imbalance - an excess - of elemental shadow is what allows for undeath and, consequently, vampirism, the dark element stifling - but not erasing - the spark of life essence derived from spirit.

In the years after, the Queen embraced her first Childer, a man from Shallam named Abhorash Nehekhara. Abhorash alone possessed the qualities that Belladona deemed vital for the transformation. Above all he was a ruthless predator, an uncompromising hunter who refused to negotiate with the cattle on which he slaked his hunger. The first Primus Abhorash, founder of Bloodloch, took four Childer of his own, forming the original noble Houses of the Consanguine.

Through him, the Bloodline flourished, and the Consanguine Legacy was secured. In the 446th year of the Midnight Age, a new era of Consanguine domination began. With the Progenitor of the Blood ceding all control over the Imperial Dominion, the Consanguine of Sapience found themselves unified under one banner, to be governed in their own way. They continue to strip their path from the hide of Sapience, casting off all mortal ties once embraced and sacrificing these weaknesses upon the altar of ambition.

With the raw potential of Sanguis, they gain mastery over their own blood, wielding it as an unholy weapon to split the artery of the world wide open. Through the honing of Mentis they prevail over the weak mortal wills, breaking them in twain with ruthless efficiency. Finally, with the depraved skills of Corpus at their command, they imbue their bodies with preternatural speed, strength, and agility.

As creatures of shadow and blood, a Praenomen is oft a dramatic, intimidating sight both on and off the field of battle. Their physical prowess is unmatched, having shed the imperfections and fragilities of mortal life, and this is represented through the brutality and savage discipline that is Corpus. Fangs and forked tongues distinguish them from lesser beings, most notable when feeding or invoking the whispers of Mentis.

Lesser undead are easily brought under their thrall and typically accompany them as shambling, mindless beings, their will subsumed by the Praenomen's greater mind. Sanguis manifests in similarly decisive, conspicuous ways, a crimson haze tinging the air when the vampire works their feats of terrible blood magic. Yet, for all that a Praenomen is a force to behold, there is a distinct regality in their ways, a subtlety too-often overlooked by the terror they are wont to inspire.

All who enjoy the gift of Yrtez come to know two defining characteristics of vampirism: the tyranny of the sun, and the compulsive thirst. The former, though it may be abated by satiety, remains a source of hate and loathing for a vampire. Habitually dwelling underground and stalking the land largely at night leads to a pallid and pale appearance. Hunger, likewise, conspires to produce the same; a well-fed vampire may mimic the warmth and vitality of the living, but theirs is a mockery of life, a facsimile maintained only through slaking the sanguine thirst.

In particular, while vampires can imitate most bodily functions either via conscious or subconscious control of their blood, the ability to procreate - to birth new life - lies beyond them, their legacies instead expanded via the embrace of progeny.

While one Praenomen might revel in slaughter and carnage to claim what is theirs, the next might manipulate and coerce those beneath them into doing what they wish. There are many ways to be a formidable vampire, so long as the path chosen leads to success or greatness in some form. So long as it brings power to the Blood.

The Consanguine are incredibly particular of those they allow to become part of their Bloodline, and rightly so, for a foolish Childer reflects poorly on an established Sire. While there are many who stalk the Night without a Sire or connection to the Primus' ancient Bloodline, those who are accepted into its ranks are considered superior to those who chose to walk alone. This superiority tends to be reflected in a Praenomen's demeanour and attitude, considering outsiders - even amongst allies - beneath them.

As the once mortal, now God of Tyranny, Abhorash, strove ever for greatness and power, seizing it with His Own fangs, so too do the Praenomen left by His Blood legacy seek it, through blood rituals, slaughter and domination. In short, a vampire is a force to be reckoned with, a creature of the night brooking neither timidity nor weakness - especially amongst their own.