Bolstering the ranks of the Teradrim are the Earthcallers, a caste of warrior priests whose order originated in the great city of Azvosh Rakar. Combining mastery over bone to enact Subjugation along with Tectonic expertise to wield lava and stone in battle, a deep reverence for the Earth underpins the lust for battle and thirst for war.

The holy verses of the Earthen known as the Apocalyptia complete the Earthcaller's arsenal, allowing them to propagate the fervour of their faith through the immortal Earthen Dirge. 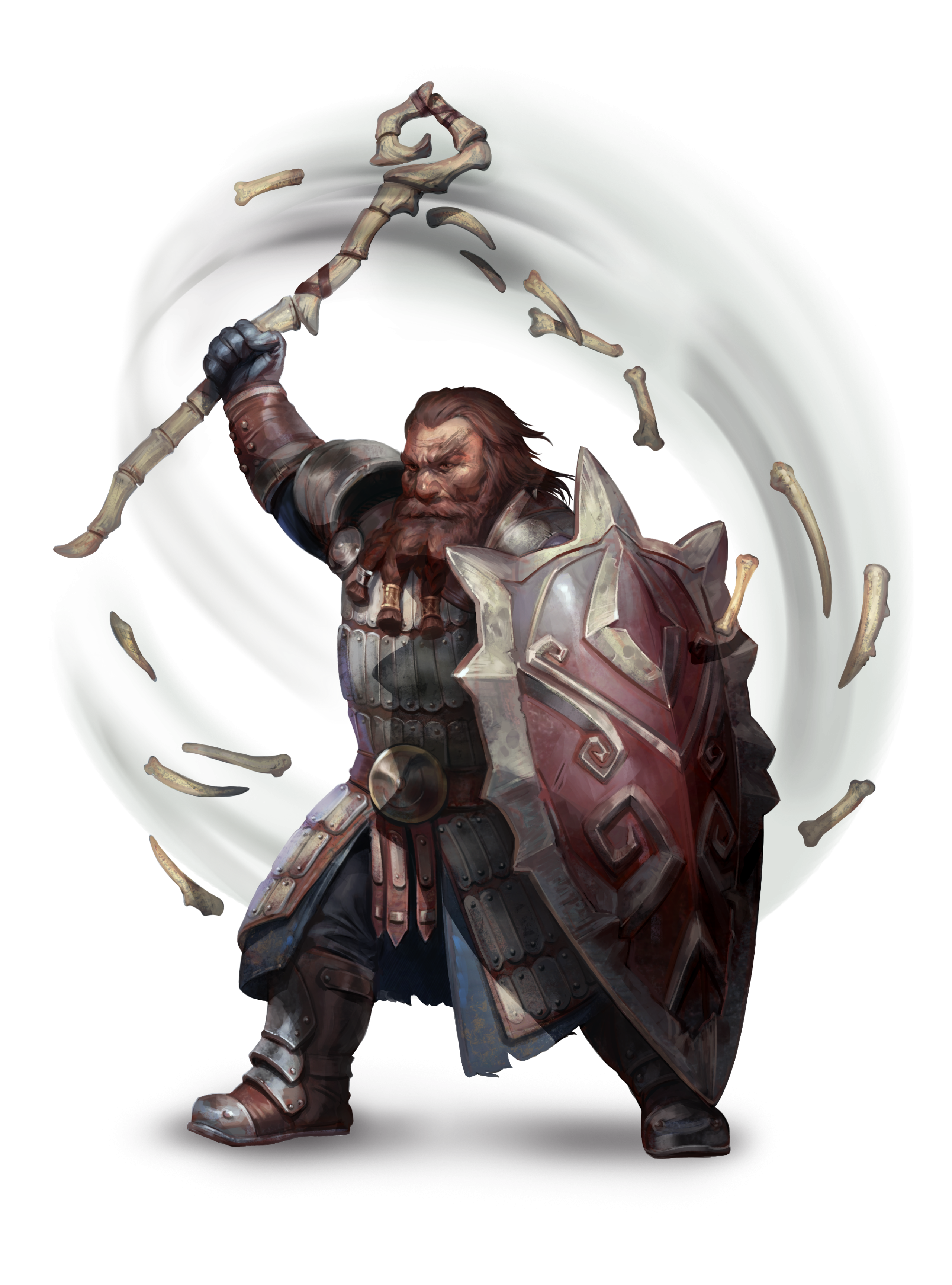 Bone carries with it power; power from a life previously lived and subsequently ended, and memories embedded in the minerals that they are made from. The mighty Earthcaller exerts its dominance via a mastery of bone in the form of Ossomancy, and complements this powerful art with an array of brutalising techniques brought forth by shield and crozier - this harrowing combination is Subjugation, that which in the past has enabled the imprisonment of the Sorcerer-Kings through blood and bone.

Earthcallers draw upon the bones of long-slain corpses cradled within the earth's embrace, bending, breaking, and manipulating them to carry out their malevolent whims and desires. This, in conjunction with their gruesome physical force, has left many an opponent naught but piles of boneless flesh in an Earthcaller's wake.

In order to maintain vigil over the Sorcerer-Kings, the Earthen of Azvosh are joined in purpose and in mind, a psychic link known as the Dirge. Timeless and immutable, within the verses of this reverential hymn and song of war exist the collective memories of the Earthen: all of time and life and history immortalised in the forever song.

Drawing upon the sacred text known as the Apocalyptia, the Earthcaller lends their voice to the unending Earthen Dirge, commanding the psychic verses to not only elicit priestly invocations but to mercilessly condemn their faithless foes to agony unspeakable should they transgress. For without war, we are nothing.

The full text of the Apocalyptia can be found upon the five great monoliths across Sapience.

Earth comes in many forms: malleable and vast like the desert; impenetrable and enduring like stone; or even molten and destructive like lava. Ever attuned to the constant, powerful movements of earth, the Earthcaller is able to invoke a resonance with this natural seismic activity and channel its potential into their surroundings or even themselves.

Ready to play an Earthcaller?

Earthcallers are warrior priests, trained in the ancient ways of the Earthen of Azvosh Rakar. Able to manipulate both the earth and the bones of their enemies, they marry martial discipline with the weaving of the Earthen Dirge into powerful magical verses.

Charged with maintaining a solemn vigil over the Pillars of the Earth and the Sorcerer-Kings held captive there, the role of the Earthcaller is that of jailer and warden, guardian against the oblivion that would come should their prisoners break free and bring about the breaking of the world

Azvosh is the Elemental Plane of Earth, the source of the elemental earth that forms part of the fabric of reality and the composition of the Prime Material Plane. Potent and unyielding, the nature of earth is that of strength and absolute purity, of glory in battle, violent conquest, and endurance without end. Ivoln, the Earthen Lord, instilled these values into the Earthen when He Himself conquered the plane in ages past, a triumph memoralised and still imitated by the Earthen in the modern era through disciplined war dances.

What are the Pillars?

The Pillars of the Earth are ancient, cthonic structures formed in a long-forgotten age. They reside in the yawning void between Azvosh and the Prime Material Plane. Uncountable in number and fathomless in size and scope, they are the shoulders of the world, mighty monoliths that keep the two planes from colliding with one another and bringing about a devastating apocalypse.

In ages past, the Sorcerer-Kings of Azvosh, some of the highest ranking Earthen, sought to steal the power of the Pillars for themselves. In doing so they invoked the wrath of the earth and found themselves bound to the Pillars for an eternity, constantly sapped of their strength as they strive to break free. For all that, the Pillars are a deadly prison, a living embodiment of the earth's cold hunger that must be consistently fed with offerings of blood in order to maintain their integrity and strength.

How the powers of the class are accessed

All three skills draw on the earth for strength in various ways.

Manipulation of bone and expressions of raw strength are carried out through the art of Subjugation, wherein the Earthcaller may call upon fragments of bone from the earth. Subjugation also involves use of the shield and crozier as the weapons of choice.

Rousing the earth itself to action is done through the skill of Tectonics, allowing the Earthcaller to wield stone and lava in battle.

Tapping into the collective memories of the Earthen allows the Earthcaller to join their voice in singing the verses of the Dirge (an eternal, timeless song composed of the voices of all Earthen). These verses are invoked by the skill of Apocalyptia and are drawn from the holy text of the same name, often involving a more spiritual and esoteric communion with the earth and beseeching it for aid.

The earth prizes strength above all else, and this is represented through all three skills of the Earthcaller. Subjugation and Tectonics are both overtly forceful and direct in their methods, often eliciting very noticeable and conspicuous effects when invoked.

Apocalyptia by contrast is often (but not always) more subtle and cerebral in execution despite being arguably the strongest expression of the Earthcaller's solemn duty as jailer of the accursed. The Dirge is almost wholly psychic in nature, directed by less overt gestures and wielded largely through looks and exertion of the mind. Prolonged recitation takes a toll on the psyche, requiring immense willpower and resolve to stave off the inevitable fatigue and exhaustion. What few audible verses exist take the form of prayers and orisons, ranging from a whisper to full-throated chants.

A connection to the Plane of Earth carries an innate risk to all the Earthen, namely the threat of succumbing to that same madness plaguing the Sorcerer-Kings. The earth is hungry, demanding of both respect and consistent obeisance to maintain favour; offerings of blood must be made regularly in order to prevent this madness from taking root. Disrespecting the earth is a fool's endeavour, and those who break faith will find themselves bereft of strength.

Suffusing bone swarms through Subjugation's ossomancy can be an imprecise art, requiring in-the-moment bone grafts and manipulation of one's own body. This can result in dislocations or misshapen bone structure if the grafting is done incorrectly.

Extended use of Tectonics will introduce impurities in the user, tainting the otherwise absolute perfection of the earth. Control and discipline are essential to retain integrity lest the Earthcaller find themselves suffering something akin to a very profound poisoning.

Continued manipulation of lava may result in scarring of the body from prolonged proximity to extreme heat, while frequent physical exertion with heavy weapons (croziers and shields) tends to promote a significant degree of physical fitness and potency.

The psychic link shared by the Earthen may also result in withdrawal effects should the Earthcaller stray too long without joining their voice to the Dirge. This too resembles a form of madness and being isolated from the Earthen communion is not advised for extended lengths of time.

Because of the nature of Earthcallers as jailers and inquisitors, trusting others can become more difficult. Paranoia may form if the mind lacks sufficient strength as fervour and belief in the Apocalyptia brings about an almost jaded and resigned state: seeing threats and enemies everywhere and eventually losing the ability to discern friend from foe if they are not fellow Earthen.

A strong sense of duty is essential for the Earthcaller, charged as they are with so important a responsibility. Members of this class should revel in opportunities for conflict and war, eschewing attempts at peace and reconciliation in favour of conquest and expressions of raw, untrammeled might.

Yet balancing that blood lust is a deep and pious reverence for the earth and for Ivoln - known to the Earthen people as the Great Father. Undeath is viewed as the ultimate expression of Azvosh's purity: a gift from the Lord that allows the Earthen to endure for eternity, bolstering their strength and resolve in order to most effectively carry out their work.

The earth does not abide the weak or timorous, nor should Earthcallers suffer falsehood or sacrilege; ultimately they are priests of Azvosh, studious pupils in the Apocalyptia and fluent in the verses of the Dirge to such a degree that speaking on it with passion and zeal comes naturally.

Bone swarms can be customised (see HELP CUSTOMISATION), but must adhere to the following rules: