As their name suggests, the Tidesages are both mages and researchers that draw upon the primal power of the ocean to enhance their martial prowess, while also working to demystify its myriad secrets. Hailing from the distant isle of Keltund, the Tidesages were made known to Sapience in the year 503 MA when the maddened remnants of an exploratory voyage drifted into the Enorian harbour. 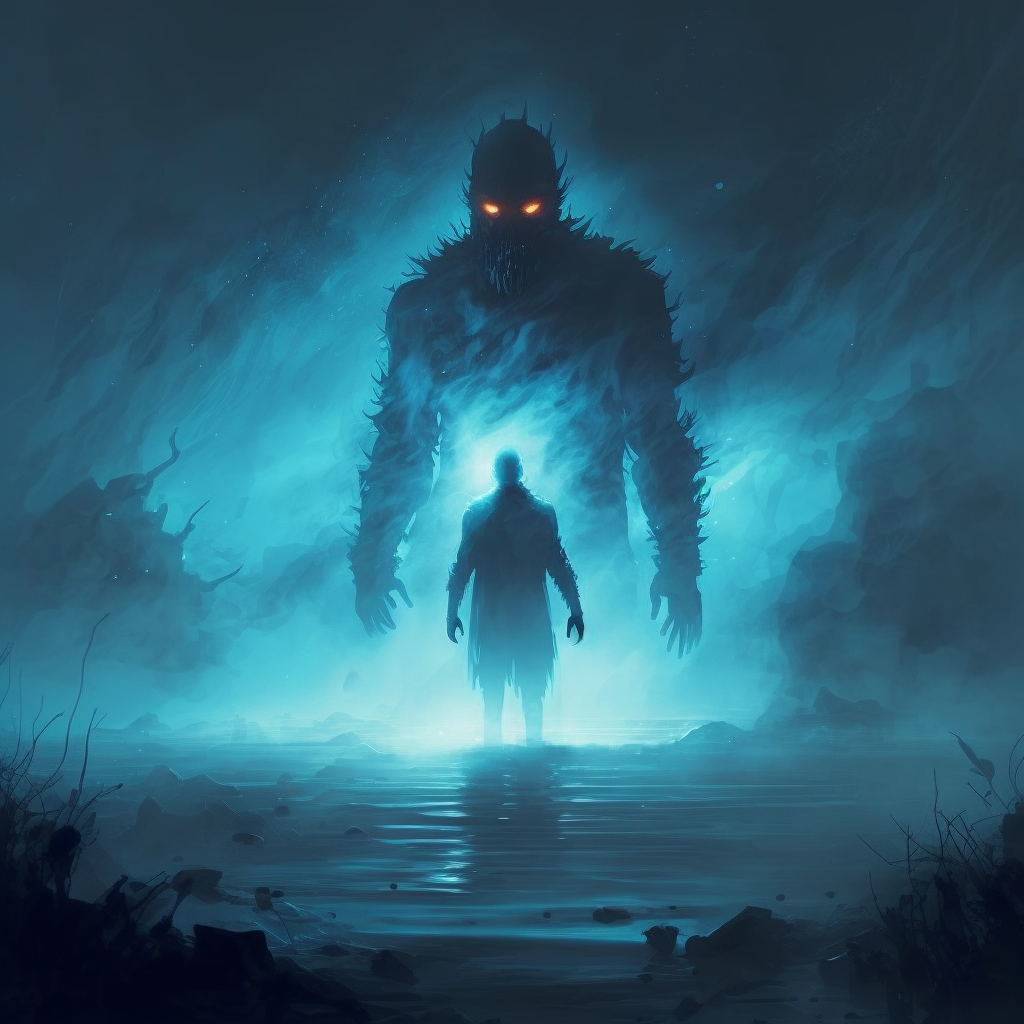 Wavebreaking is the name given to a combined arsenal of martial techniques originated by the inhabitants of Keltund. Lacking the more profound connection to the Water Plane that classical Mages enjoy, Wavebreaking instead employs transient connections to Water while leaning primarily on nautical expertise and ancient sailor's techniques transformed into deadly battle manoeuvres.

Foregoing the use of traditional weapons and unwilling to utilise their own bodies for the purpose, much of the Wavebreaker's art involves use of a selkachoar - a club transformed from basic bludgeon to deadly weapon of war by embellishment with the teeth of a shark and empowerment beside the waves. This efficient weapon, combined with the limited control over water, creates a brutal and unrelenting combat style, equally capable of grinding an enemy to dust or drowning them under the pressure of a great wave.

Eschewing the traditional elemental focus practised by most Magi professionals, Tidesages wield the skill of Synthesis to - quite literally - synthesise a proto-elemental from crystals, an ancient form of magical focus derived from the pearls of oysters and once used in the act of spinning crystalline vibrations. These constructs are element agnostic, though the skilled Tidesage is capable of imbuing their elemental with one or more specific elements to elicit particular effects.

Pseudo-sentient, these artificial elementals act as both companion and protector, fiercely loyal and unwavering in their adherence to the commands of their master. In battle, Synthesis employs a variety of techniques both martial and magical, with the most skilled practitioners able to instill a wide array of enhancements and innate reflexes to grant incredible alacrity to their elemental.

Vast and varied are the ancient myths of the ocean, storied fables of deep dwellers and many-eyed eldritch horrors lingering beneath the wine-dark waves. Beguiling sailors since time immemorial, the many mysteries held jealously by the sea remain elusive, the extent of its fathomless depths unplundered. On the distant isle of Keltund, a landmass draped in frigid fog, some have learned to harness these very enigmas as their own.

Inundation is the art of conjuring and controlling the freezing fog which lingers o'er shore and shingle, and bending it to one's own whims. Capable of both healing and destruction, Tidesages wield this skill to manifest a tithe of the ocean's secrets in its morass-like expanse, and, in so doing, claim entire regions of fog with which to empower themselves. While the lesser magics of Inundation are powerful in their own right, the higher sorceries allow the most skilled practitioners to manipulate the fog into the form of an eldritch apparition, capable of substantially more great and terrifying works.

Ready to play a Tidesage?

Supporting the ranks of the Ascendril are the Tidesages, researcher-mages whose origins lay on the distant isle of Keltund. Believing themselves to be the world's only survivors following the fall of Kelsys, Tidesages were revealed to Sapience at large in the year 503. Wielding the powers of Wavebreaking, Inundation, and Synthesis, Tidesages draw upon the primal power of the ocean to enhance their martial prowess, while also working to demystify its myriad secrets.

Their origins lay within the founding of Keltund in the wake of Kelsys' violent destruction. Although the explosive emergence of the elemental vortex wiped out nearly all Kelysian life, a distant fishing fleet bore witness to the downfall of their underwater home. The shockwave from the vortex flung the fleet far out into the ocean, and the last thing the survivors saw was the gargantuan silhouette of the Almighty Kerrithrim, its miles-high form dominating the horizon as it marched upon the mainland.

Assuming the complete destruction of the mainland, the survivors regathered their fleet and set out in search of a new home. That home would be a distant island in the eastern ocean, known as Keltund. While Keltund was spared from the havoc wreaking the oceans nearer to the mainland, a thick and frigid fog blanketed the island, forming the basis of Keltundian folklore and myths. To this day, the ruling castes fear what lurks within the fog, and native Tidesages are sent out into it as a test of their strength.

Wavebreaking is a combination of ancient Kelysian military arts and classical sailors' techniques. In combat, the Tidesage wields a selkachoar - a club adorned with the teeth of a defeated shark - to enact most of these physically-oriented techniques. Supporting their battle prowess are primitive connections to Denan Arloi, the Elemental Plane of Water. While a Tidesage cannot channel Water to the same extent as fully trained mages, they are nonetheless able to exact some measure of control, conjuring disruptive riptides, drowning enemies in a great wave, and tapping into the earth's natural water currents for travel.

Inundation draws on the eldritch fog surrounding the isle of Keltund. By bending this fog to their own will, Tidesages are able to bring whole regions under its influence and empower themselves in the process. The myths and legends of the ocean come to life when wielded by a skilled Tidesage, and the singular greatest manifestation of the primal sea's presence is the eldritch apparition - a great spectre in the fog capable of great terror and destruction.

Synthesis allows the Tidesage to harness the latent magic found in refined crystals to create a pseudo-sentient elemental of their own making. This is the same magic that Mages of old utilised to bring about crystalline vibrations, and the familiar chiming of said vibrations can be observed in these constructed elementals.

While there is some subtlety involved in the deeper workings of Inundation, much of a Tidesage's work is anything but subtle. Wavebreaking is a boisterous art, derived from grizzled sailors and soldiers, and its use in battle draws inspiration from the sea itself: violent, choppy, and fascinating. Despite the subtle magic employed in its use, the more profound effects of Inundation are similarly stark and unsubtle - fully realised, the eldritch apparition is a churning storm of nautical horror, its gnashing mouths and writhing tentacles impossible to ignore.

Like most seasoned sailors or lifelong pirates, Tidesages long for the presence of the ocean and too much time spent away from the sea will incite a deep yearning. This yearning is known to be so profound that it can be channeled as a palpable effect in Wavebreaking. Working with the fog is dangerous and requires a strong will. Careless or reckless manipulation of fog without a steel resolve can result in madness.

The Tidesage can be played as mage, researcher, scholar, and scientist, as it blends elements of all these traits. What unifies them is their shared love and respect for the ocean and a fascination for unravelling its mysteries. Tidesages are invariably curious and bold, driven by discovery and adventure.

A Tidesage's selkachoar is a deeply personal thing - a weapon created from their own conquests in order to demonstrate capability as a warrior. It belongs to them and only them, and, while technically possible, it is considered highly taboo to lend another your selkachoar or to take up one that belongs to another Tidesage.

Synthesised elementals may be customised, but must remain distinctly identifiable as a synthetic elemental and be crystalline in nature.

These are proto-elementals and thus don't adhere to any one single element. As such, they cannot be customised as appearing to be made of one specific element, i.e no fire elementals, spirit elementals etc.

Elements can be used in the customisation if done judiciously, but it should be
subtle at best and not imply that it's an <element type> elemental in any way, since the blank aspect is required for lore-reasons with Imbuing.

Customisations without a rune of transformation are limited to mundane weaponry which must adhere in some way to the original designs (a club of some sort, adorned with shark teeth, fairly makeshift and brutal).

Runes of transformation are required for more elaborate customisations, e.g anything including magic or supernatural power beyond a basic weapon.

Customising selkachoars does not make them permanent, but creating a new one will automatically apply your approved selkachoar customisation provided you do not already have one in existence with that customisation on it.