The Alchemists of Aetolia

Eschewing the numerological magic used by their Archivist peers, Alchemists train their focus specifically on pursuits in the realm of science. Manipulating and contorting that which is presented to an Alchemist in nature is a common theme of the class, whether it be through the transformation of minerals and compounds via Alchemy, or by corrupting natural flora in Botany to create blighted plantlife and bend it to the Alchemist's will.

Trained Alchemists are equally capable of everyday scientific research and breakthroughs as they are ruthless, cataclysmic destruction. Encompassing a variety of fields, their skillset is a diverse one indeed. 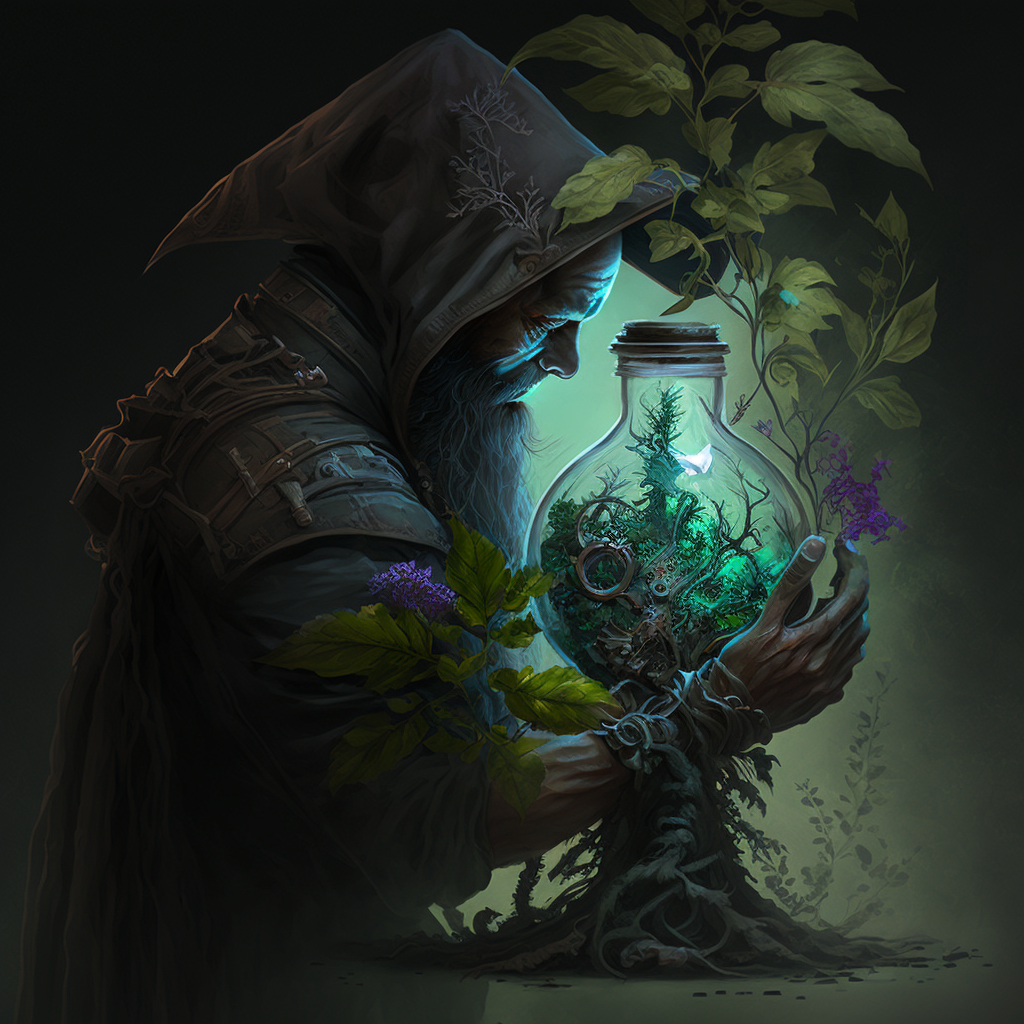 Few greater manifestations of the scientific process exist than those demonstrated via Alchemy. Alchemy involves the careful transformation of that which is presented by the earth into tools and chemicals to be used as needed. Masters of precision and control, Alchemists maintain a vigilant eye on chemical reactions and volatility, utilising their knowledge of both to devastate and overwhelm those that stand in their path.

A skilled alchemist wields an alchemical conduit with a finesse and capability rivalling that of a knight's blade, this self-crafted tool used to both facilitate their experiments, and wreak electrical havoc on those that would interfere with them.

An Alchemist's usage of Experimentation is not so trivial as the name may insinuate; from sentient experiments trained through rigorous and demanding protocol, to the creation of caustic and debilitating compounds, Experimentation to an Alchemist is where theory shifts to become a reality of their own making.

Those well-suited for Experimentation will also find themselves capable of devoting their mind to certain scientific disciplines, creating and embarking upon expeditions, and even fashioning useful lab armaments from what little scraps may be found around them.

No grand breakthrough has ever come about sans painstaking, often dangerous research, and the highest of skilled scientists know that the best results may only be achieved through setting aside the trappings of moral and principle in favour of that most sacred of oaths: discovery.

A number of Experimentation abilities require training in certain Disciplines. Acquiring this training can be done by visiting the alumni in the Spirean Institute, where you can STUDY UNDER <denizen> to gain their knowledge.

Fieldwork is an essential part of the Alchemist's repertoire and no more starkly is this aspect of science represented than in the skill of Botany. Unlike those of a Shamanic persuasion, the Alchemist prizes progress above such mundane concerns as the sanctity of life and the preservation of nature. To them, the natural world and its resources are things to be exploited in the pursuit of knowledge and discovery. Botanists therefore utilise their prowess in science to subvert nature to their will, introducing chemicals into the forests and woodlands of the world in order to bring about unnatural phenomena, rapidly accelerated growth, and other nefarious effects.

Botanists can work in all native woodlands but most opt to claim a specific site as their field laboratory, enabling them to enact a variety of unique effects that a typical forest locale would not endure. Where the skill truly flourishes though is in the spreading of blight. This aberrant, monstrous foliage will, when coerced to grow by a skilled hand, swiftly overrun a location and claim it as part of the botanist's domain. While within this territory, the Alchemist is able to elicit countless potent and dangerous effects as if they were in a forest itself.

Ready to play an Alchemist?

Roleplaying an Alchemist is bound to be an interesting and exciting endeavor. Whether pursuing the role of a bookish scholar that sees little more than the inside of a laboratory, or a nefarious scientist driven by the need to discover at all costs, this class covers ample possibilities.

Alchemy takes notes from chemistry, utilising minerals from the earth in conjunction with an alchemical transmutation conduit to wreak havoc on foes. From the creation of virulent compounds designed to crystallise when inhaled, to the intricate and precise management of volatility present from ongoing chemical reactions, this skill presents itself as an art that requires delicate precision and mental fortitude to execute properly. Arguably the most 'flashy' and direct aspect of the Alchemist's arsenal, the telltale signs of crackling lightning and violent explosions are never far away.

Experimentation, on the other hand, draws significance from the scientific method; dutifully-trained live test subjects, each created to serve specific purposes, will fearfully heed an Alchemist's call. In battle, these twisted experiments are highly specialised, drawing on their artificially altered state to elicit certain deadly effects. It is through Experimentation that created compounds can be applied to an alchemical conduit to elicit a slew of inhibiting and helpful effects. Experimentation is also where one will find the basis of scientific study.

Finally, Botany exists as a replication and - at least in the eyes of an Alchemist - an improvement on a Shaman's ability to utilise nature. Rather than relying on fickle magical means, Alchemists bend, corrupt, transform, and subjugate nature to their will through the use of serums, chemicals, and pheromones. Field labs allow an Alchemist to set up a location from which they can practice their studies out of view from peering eyes, and free from the danger of human impact that traditional city labs present.

What is the blight?

Originally created by Litrix, a Xorali scientist in the employ of Spinesreach, the blight is essentially a morass of aberrant foliage. Prolonged experimentation resulted in once-natural flora being transformed, mutated into what exists now as something quite unnatural and distinct. This blight - recognisable by its vivid colouration and almost sentient nature - is capable of numerous monstrous feats, and ever seeks to expand itself - much like the shadow element that makes up the majority of its form.

It was Feirenz Ourborian who first succeeded in altering the fundamental elemental composition of Litrix's creation, granting Alchemists the power to control this blighted plantlife as an extension of their own influence, coaxing it to overrun regions and claim it as part of their own domain.

Alchemy is as much a balancing act as it is an art; imprecise measurements and failed timings can result in volatile explosions, chemical burns to the Alchemist, or accidental electrocution due to the mishandling of an alchemical conduit.

Experimentation brings with it another suite of potential maladies for consideration, namely the risks associated with the management of sentient experiments. Motivated primarily by fear, it is not terribly uncommon to hear of the occasional experiment turning on its handler in an attempt to seek freedom. Depending on the experiment type, these instances can result in lacerations, burns, broken limbs, or even fatal poisoning.

Constant exposure to blight, and its associated means of creation via Botany, can cause breathing and skin issues for Alchemists. It's important that extended physical contact with blighted flora is followed with some form of decontamination or cleaning protocol to rid the Alchemist of mutated spores or plant secretions.

A strong mind is a prerequisite for an Alchemist to succeed. The creation of compounds and balancing of chemical reactions is not a pursuit suited for those easily distracted or lacking an ability to be precise. Where others rely on magic and physical acumen as a crutch to accomplish their goals, the mind and the scientific process by extension are the Alchemist's primary armaments.

A degree of practicality and pragmatism will carry an Alchemist far. Botany as a practice involves the deliberate augmentation and manipulation of nature, which many would consider abhorrent. The means employed by an Alchemist to accomplish their botanical feats are dangerous and harmful to the flora they interfere with, but concern for the natural world is of little importance to those vested in the science of discovery. All knowledge has its price.

Likewise, the act of utilising sentient experiments is likely to be regarded by most outside of scientific circles as particularly unsavoury.

That is not to say that all Alchemists are cruel, but one must be able to see the bigger picture and view the harm done in pursuit of the greater goal as a necessary sacrifice for success.

Conduits can be customised but their nature as scientific implements means they must remain metallic in origin and be of reasonable appearance and design as to be capable of conducting electricity.