The Akkari of Aetolia

Forged in the fires of war during the Age of Shadow upon the plane of spirit, the Akkari Host rose to purge the sickness that riddled their lands and drove their people to madness in eddying tides. Duamvi one and all, the Akkari are holy warriors and blessed hunters without measure that doggedly pursue their shadowbound prey. 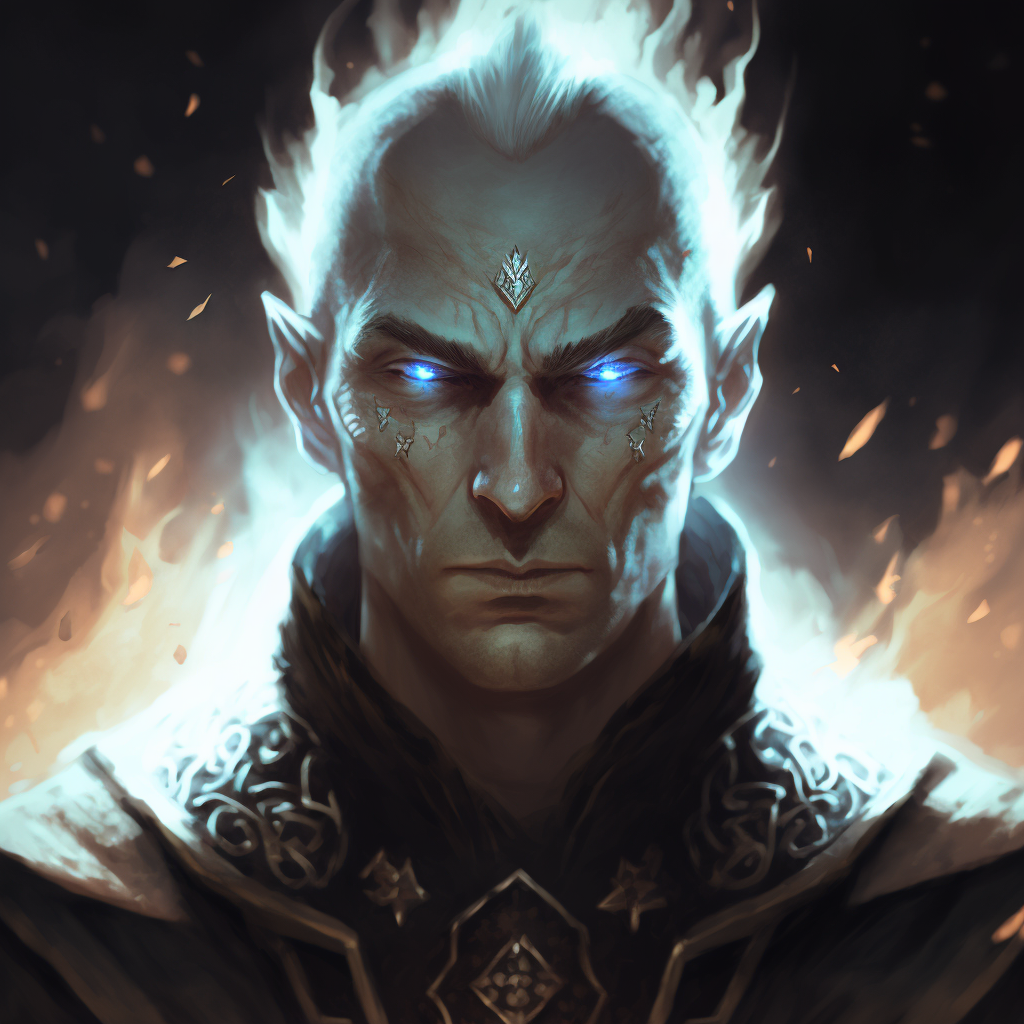 First and foremost, Akkari are soldiers in the grand army of the light, warriors of the sacred flame, sworn to serve the cause of spirit above all else. In order to effectively combat the manifold forces that befoul the world with their fell machinations, an Akkari must hone their physical body to its maximum effectiveness.

Wielding the holy light as both sword and shield, physical acuity manifests in a slew of both offensive and defensive capabilities. One skilled in Ascendance will find themselves able to resist blows which would break mere mortals, to move with greater speed, to rekindle ravaged limbs, all while denouncing the wicked, hunting down heathens, and delivering them from their evil ways.

Ascendance is not only confined to corporeal prowess, however, but represents a greater bond with Rewh'va, the Plane of Spirit. Temporary bodies are a mere shell for the Akkari's ascended consciousness, the profound empathy with Spirit granting a variety of miraculous feats unknown to lesser mortality. The mission of the light is never ending, and so it must be with the Akkari; even in death, Ascendants shed their physical forms and manifest as raw, ascended conscious, calling upon the light to grant them a new body, that they may fight on eternal.

Opposing the forces of evil and darkness demands strength of will and mental fortitude. Many are the lies and falsehoods of the profane, the dark arts a venomous snake whose antidote is faith and resolve unshakeable.

Dictum allows the Akkari to express their zeal through holy words and ancient spiritual scripture, their strength of will and depth of conviction granting heightened senses and great powers of discernment and investigation. Such words, when dictated by a skilled Akkari, are given power over the weak minded and the faithless, causing them to suffer a slew of debilitating effects with but a simple command from one who walks in the holy light.

Dictum therefore is the skill of mental acuity, the Akkari's mind honed to a razor-sharp edge to resist that which would tempt them from their path and to turn the power of persuasion back on evildoers with righteous vengeance.

While each of the Akkari Sects specialises in its own methods of battling darkness, all who fight for the light are holy warriors, soldiers of the sacred fire. Discipline defines the Akkari order, forming the basis of their military command structure while also reflecting the implacable and steadfast resolve one must hold in order to fight evil in all its forms.

The inextricable link between blood and spirit is a cornerstone of this practice. By judiciously expending one's precious lifeblood, that which sustains mortal existence, spiritual powers aplenty are at the Akkari's disposal for use in battle. These miracles are manifold; mere novices will find themselves capable of sensing the presence of nearby dead, while those who commit themselves fully to the sacred works will find themselves able to declare holy inquisition, to damn the profane as pariah, and more.

One's place in the chain of command is essential to proper conduct, and it is through Discipline that said chain is maintained, expanded, and replenished, the authority of command flowing downwards in an array of executive powers. All shall find themselves able to recruit and train a squire to aid in their service, passing on the ancient traditions to those who come after.

Ready to play an Akkari?

In the holy tongue of Spirit, the name duamvi means 'flawed one'. When the Triad sought to create new angels to fill the ranks lost in the war against Shadow, they drew forth the essence of light and spirit as their own creator had done, using it to create the first duamvi. Though their intention was to create boundless angels without physical form, their power to create was limited, and they found they were able to only create something still bound by the trappings of physicality, requiring the bonding of a willing vessel in order to manifest their power.

Akkari are ascended duamvi, warriors of the holy light sworn to serve the cause of good and uphold the ideals of all that is pure and righteous. Though the concept of duamvi was already known to Sapience, with numerous adventurers taking on the symbiote metamorphosis, it was not until the Year 504, during the Second War of Night, that the full powers of the Akkari's dauntless host manifested.

A way was discovered to ascend beyond the confines of the physical form, bringing them one step closer to the nature of angels, but still requiring some physicality to exist. Under the eyes of Exarchs Aban, Berrad, and Saebi, high-ranking officers in the Akkari's Dauntless Host and representatives of Ubarin, Nyasia, and Ael'mael of the Angelic Triad, the Templars of Enorian were the first to be granted training in the newfound art, following a slew of protracted battles against the forces of Ohlsana, the Shadow Mother.

Rewh'va, the Plane of Spirit is the source of elemental spirit which naturally forms part of the Prime Material Plane. At its core, spirit is the element of order, the natural opposite to destructive, disorderly shadow. Its nature is restoration, healing, and growth, and it is often associated with light. Blood is a manifestation of spirit in the body, its life-giving properties reflected in physical form. Access to Rewh'va is gated through Damariel, the Unbound, who acts as warden to the Spirit Plane on the Prime.

What is the Angelic Triad?

Known as Nyasia, Sage of the Host, Ubarin, Shield of the Host, and Ael'mael, Blade of the Host, the Angelic Triad are the three children of Dejaani, Guardian of the First Flame. Beings of pure, unfettered spirit, they are immensely powerful, akin to Gods and, though they are not explicitly Gods, they are nevertheless worshipped as such by denizens of Rewh'va. The Triad hold stewardship over the Plane of Spirit, ruling on behalf of Dejaani as exemplars of the holy light without peer.

It is by the grace of the Triad, through an accord formed with Idar Karif in an age long past, that Sapient Luminaries are able to summon angels - spiritual projections from Rewh'va - to their cause. While only able to transiently manifest on the Prime Material, the desperate plea of Enorian in the Year 504 resulted in the destruction of Shadow General Isalemei, the corrupted Djinn obliterated by the Triad's holy, but utterly merciless light.

All of an Akkari's powers derive from Rewh'va, the Triad, and by extension, Dejaani, whose worship in the Spirit Plane is ubiquitous. While they do not channel elemental spirit in the same subtle ways as trained Mages, they do nonetheless wield the holy light as a weapon of raw might and smiting fury, drawing on faith, not elemental acuity, in order to do their works. Ascendance and Discipline are where this religious mysticism is most prominent, while the skill of Dictum is one of precision and charisma.

By its nature, wielding the powers of the light carries with it a bright radiance. In battle, the Akkari's primary choice of weapon is the twin-bladed manta, a dual-edged sword capable of spilling great deals of heretic blood. Akkari are often seen surrounded by a glowing aura, and their holy works commonly involve reciting prayers, undertaking sacraments, condemning heathens, and other zealous activities.

Higher arts take this concept to an extreme, specialist workings allowing for the declaration of a holy inquisition, performing difficult exorcisms, and even bringing forth brilliant fonts of light to battle on their behalf. These powers can even manifest on the environment, through shimmering prisms and other expressions of faith.

Side effects of use:

Becoming jaded and cynical is a very real risk for an Akkari in the Midnight Age. The forces of evil are so prolific and vast that the endless nature of holy crusade requires a similarly deep well of faith and longevity in order to endure. Straying from the path of the light can incite deep despair, while wielding it in battle can become almost addictive; it is for this reason that most Akkari balance their direct miracle-workings with oratory, dictation, and physical exercise.

Native duamvi from Rewh'va are more heavily in tune with spirit in terms of body make-up than Primal duamvi. This is, fundamentally, what allows them to utilise Akkari abilities while Primal duamvi cannot.

It is for this reason that the nighttime phenomenon of the dark star, an unnatural, physical embodiment of shadow, causes Akkari physical harm.

Becoming ascended for a Primal duamvi gives them a greater font of spirit, allowing them to properly utilise Akkari abilities, but also leaving them susceptible to the dark star if their spirit falls too low.

While Akkari are all united by their deep reverence for the light, and their unwavering devotion to the cause of spirit, zeal is of course a spectrum and the Akkari way allows for multiple avenues of expression. The three Sects (Dosan, Naarak, and Il'ahji) represent these varying outlooks and differing extremes. The Akkari way allows for mercy and justice, but equally allows for zealous, obstinate fanaticism. Those who go to the extremes tend to be inquisitors, witchhunters, crusaders, and justicars, unwilling to compromise for any reason.

Invariably however, Akkari loathe the forces of darkness and are willing to do almost anything in order to eradicate those that would bring harm to the good and the light. At the core, Akkari are soldiers in the army of the light, and comport themselves with the military discipline and ardent devotion expected of those sworn to so august and sacred a cause.