Sometimes the best explanation is the events post! The war has ended, long live the Second Ophidian Empire. 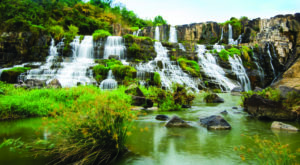 In the early days of Variach, 475 MA, a strange lull settled over the Liruma. The thunder of hooves lead to silence as the Mitrine outriders retreated to fall into a defensive position around their village. Following orders from higher command, the Ophidian forces withdrew a few paces, and settled in to hold their new-claimed territory. Breezes withdrew from across Sapience, the air stilling as the Mitrine Spirit wove around its little domain, protecting its people in the tense calm of waiting.

Scouts slipped back and forth from the Great Rock and Dhaz Mitrine, solemn as they passed between the Empire’s standing army and the tent city of the nomadic wind-walkers. It was decided: The Empire and the People would convene.

The following Gosday, a retinue accompanied the Empress Agra and Emperor Pa’akth across the Liruma to neutral ground, a small island nestled in the Pachacacha. There, Sunaguan Vari’ik, with the support of all four Mitrine tribes, surrendered the grazing grounds of their ancestors to the Empire. He turned over blade and blood, the Unali’i, Ahes, translating between peoples.

The Ophidian Empress accepted without qualification. The Liruma is the territory of the Second Ophidian Empire, as well as the ruins and Spirit trapped within. The Mitrine, unable to contest this, but also unable to swear for the deeds of their progeny, made an oath to abide their Spirit’s imprisonment. They left with a small hope that the unborn generations would meet again in that neutral place, and find an accord that the current could not.

Now the Empire sets its eyes upon its recognized territory, ready to build a new, stronger foundation for its future. The Mitrine fall back to tend to their wounds and look to the south for survival.

Let us also welcome the newest player race, Kobolds! With two new abilities and a new language, at that.