The Apocalyptia of the Earthen

This is the sacred text of the Earthen of Azvosh Rakar. Known as the people of war, the Apocalyptia tells of the immortal dirge and relays the ancient history of the Earthen people. 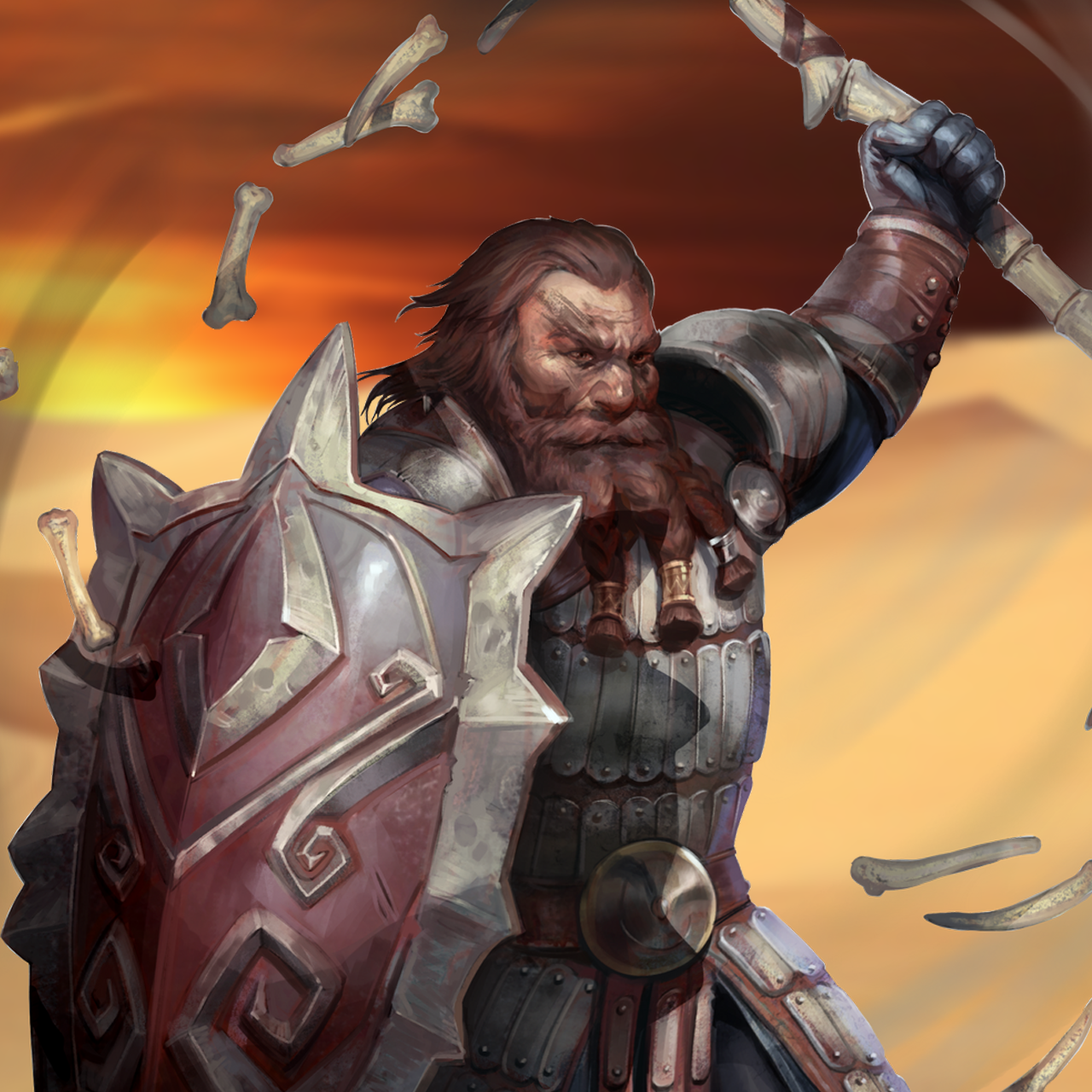 It rang in the black before time was time, resonant silence wrought as a promise of purpose unyielding and duty without end.

It was murmured in the fathomless depths of the yawning abyss, where the bones of the world rest upon shoulders of ancient stone.

It became a whisper set free to roam amidst the darkness, where in the eldest days the Great Father did bind primordial evil in mighty chains.

Its words were turned loose on those with ears to listen and minds to comprehend. And it was a song.

It was the song of war, its verses writ in sanguine strife; earth calls earth, earth feeds earth, and from the earth, eternal life.

The Dirge began at the dawn and transcends time, a song of all voices and none, silent and sublime.

'You shall learn to sing it' spake the voice, and so it was that the people of war were shaped in the image of the earth's perfection.

Honour always the earth, and you shall know its grace and taste its bounty.

Betray never the earth, lest you rouse its ire and be cast aside as grist upon the wheel.

Azvosh eternal and brutality incarnate: this is the way of the earth. No taint shall blight its highest peaks nor foul its bottomless depths.

Thus on bended knee did the first ones make their tribute of flesh and bone and blood. The price was paid, the bargain struck.

And so the earth provided. Power and might did flow forth, and we would never again kneel.

The People of War

On the bones of the great wyrms did the first ones build their citadel. They named it Azvosh Rakar, a seat of power at the very heart of the Domozvai Wastes.

From this fortress did we exult in the glory of war and from its earthwrought gates did we gather the warbands and sound the clarion call.

We bellowed aloud our challenge for all to hear, a quelling chorus to span the plane entire with its indelible refrain.

Violence spilled forth as if an avalanche unleashed from the walls of the great city, the footfall of armies mustered in a booming promise of conquest come to stake its claim.

And so the sacred earth did tremble beneath the relentless thunder of drums beyond counting.

Too did all our foes quiver at the sonorous roar of battle hymns so savage as to still their hearts with primal fear.

We spread across that great void to enforce the will of the earth.

We danced the dance of swords and spears in remembrance of the Great Father's battles of old.

And all who dared oppose our advance were sundered in twain by the might of earth, brought to heel by the conclave of war.

All shall bear witness to truth ineffable: the strong prevail, and the weak are remade by the earth.

May we be harrowed unto eternity through battle unending.

Glory to the unforgiving earth!

May Azvosh gird the depths of our resolve and stoke the heat of our fervour.

Glory to the unspoiled earth!

May impurity be scoured from the sacred lands and laid to dust amongst the shifting sands.

Glory to the perfection of earth!

And may we never know peace.

The earth must be fed, for it is a vast and hungry beast, pitiless and cold.

Hubris swelled within the kings of old, their hearts consumed by greed.

They did seek to break the will of the Pillars, to purloin the power of the rapacious eons.

But infinity is not so easily tamed.

Where the Sorcerers perceived weakness they faced only strength indomitable.

The wrath of Azvosh is great.

Where they saw opportunity they courted only damnation inevitable.

The vengeance of Azvosh is terrible.

And as they roused the ire of the earth they knew only ruin inexorable.

The fury of Azvosh is absolute.

And so those ancient kings were summoned to face judgement before the earth.

Verdict was rendered and sentence passed: captivity without end, bound in blood, bound in bone, shackled to the Pillars and cleft from the rapturous union of the endless song.

Thus were their voices stilled to loath quiescence evermore.

And they would know only weakness and torment, their will sapped to slake the thirst of ages.

In darkness they dream, striving for freedom. In darkness die their silent screams, despair their lone companion.

Gibbering madness is their lot, a noisome curse to spoil the whole.

Withering wastage is our fate, 'less that great void be paid its toll.

The blood price spares the faithful few, and thus the earth shall have its due.

'Ware the perils of avarice and pride, for it is these that drove the Sorcerer sovereigns to their heresy.

No longer would all the voices of all the earth be joined as one.

Yet ever does the Dirge abide, immune to time, a searing lullaby to staunch the wounds and mend the skein.

The will of the earth is unyielding; implacable we must remain.

The will of the Earthen is unyielding; vigilant without refrain.

We bestride the brink of finality with hearts of stone and minds of steel.

We gaze upon the inscrutable empty to know the end of the beginning and the origin of the end.

So do we gauge in solemn observation. And so are we measured in turn.

We are the jailers of the accursed, the bulwark and the bastion.

Architects of bone and blood, we ward the stone and guard the sand.

All who break faith shall stand trial, and the Council of Ash will preside.

May the faithless repent or be broken, and the penitent shorn of their pride.

Steep is the price for transgression, the judgement unflinching and cold.

Woe be upon the accursed, atonement from iron and gold.

And should we falter, so shall the Devourer's ancient bonds be shaken; to stir from sleep dreamless, and in the darkness waken.

And lo shall He open wide His abyssal maw and snap shut His jaws about the world of man to feast.

Our sacred charge shall break upon His ravening hunger, the worldspine rent to dust in the depths of a pitiless void.

And so shall all the peoples of all the worlds weep gelid tears, as Prime collides with Earth in fatal union.

The Pillars will crumble as hope dies. But He shall never be sated.

What was made will be shattered; what was sung will fall silent; time and life and memory shall be but ashes on the wind.

All shall return to Chaos. And it will be the End.